While in Torino, a friend took me to Piazza Savoia in the historic center of Torino (Turin).  Piazza Savoia was designed in the 18th Century, as Torino’s citizenry grew larger.  At that time it was known as Piazza Plum.  The square went through many name changes between the time it was built and and 1860 when the name was changed to Piazza Savoia.  Today the Piazza is famous for the imposing obelisk of Beveno, which stands 20 feet in the center of the Piazza.  As we walked through the Piazza, I couldn’t help but feel the French influence in this beautiful area.  After all, the influence of the Savoy family – the oldest of royal families in the world, is steeped in Torino’s history.

As we strolled through Piazza Savoia I stopped to look into the window of a small shop and saw a young man making shoes.  There were no other workers in the store and  for a moment I watched this very focused young man at work.  We decided to go in and I could smell the expensive leather pieces he had on various tables.  My friend explained that I was American and that I was very curious about his craft.  He was so kind to spend time proudly explaining the process he goes through to make custom “hand-made” men’s shoes.  His name was Francesco and the name of his shop is Bottier.  He explained that one pair of shoes takes between 4 to 6 months to produce, at a cost of approximately 3,500 Euro.  First, the leather is chosen then measurements are taken from which a drawing is produced. 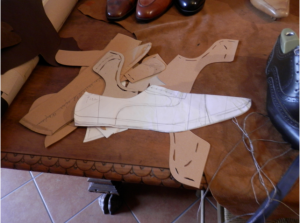 At that point, a sample shoe is made and fitted.  Once this process is completed, the actual shoes are made.  After explaining the process, he showed me a pair of shoes he had just completed and I can remember thinking as I looked at the soles of the shoes that they were as elegant as the shoes themselves.  He graciously spent about 20 minutes with us.  I didn’t want to keep him any longer as he was the only one working in this small shop, but I would have loved to learn how long he had been making shoes and if it was a craft that he learned from his family.  The name Bottier is French for Boot Maker, but the term carries with it a connotation of distinction and quality. 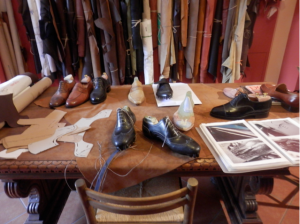 What I have learned since returning, is that prior to the 1900’s most of Europe looked to France for shoes.  After the war, however, Italy was in a bleak economic state and many craftsman decided they could make shoes; their leathers were better and soon Italy dominated the market.  In fact, some of the top fashion houses in France have purchased small shops in Italy, making hand-made shoes.  I have also learned that “hand-made” does not always mean “custom-made.”  I am certain throughout Italy there are many hand-made shoe cobblers that with large staff produce in large amounts.  What is so interesting about Francesco and Bottier is that he alone creates each shoe order specific to the client.

About the Author: Nancy