Home|Things To Do & See, Uncategorized|Lago Maggiore – Cannero Riviera
Previous Next

Lago Maggiore was recommended to me by a friend in Milan – in particular the Cannero Rivera which lies on the north-western point of the lake – nestled up against Switzerland. Cannero is in the Province of Verbano-Cusio-Ossola and is approximately 5.58 square miles.

While in Cannero, I stayed at the Hotel Cannero (please see my review of this wonderful hotel under “Hotel Reviews”). It was a beautiful, relaxing point of my time in Italy, and I spent time hiking the cobblestone curvy pathways lush with foliage, exposing beautiful views of the lake. The small pathways are lined with little le trattorie with interesting menu’s influenced by both northern Italian and Swiss gastronomy. I loved walking around this quaint area where on a grade school fence, children’s artwork was proudly displayed. There were few Americans here (which I enjoyed), but communication was not difficult as most locals speak enough English to help you, if you do not speak Italian.

On my last afternoon in Cannero, I took a ferry, stopping at all the little communes along the lake. Read More About The Ferry To Stresa 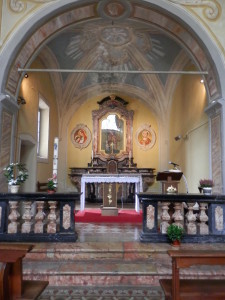 One morning I took a walk after breakfast and I came upon a beautiful Chiesa, La Chiesa di San Rocco, Cannero Riviera, Lago Maggiore, built in the late 15th Century following a wave of the plague. The church was dedicated to Saint Roque, the French Saint and miracle-worker from Montepillier. Saint Roque lived and died in Italy caring for the victims of the plague. When he came to Lago Maggiore he was mistaken for a spy from Angera and was in prison for 5 years. 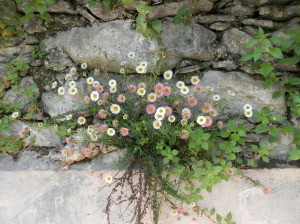 I loved Cannero Riviera with its lush hillsides, winding narrow cobblestone streets, beautiful gardens and fiori growing from the rocks, and I certainly hope to return to this lovely village.

About the Author: Nancy